In what has emerged as exciting news to KGF fans, the creators of the film, Hombale Films, have revealed on social media that on December 2nd at 2:09 pm they will make an announcement about their next film. This announcement comes amid reports suggesting that for his next film, KGF director Prashanth Neel will be collaborating with Prabhas. While no other announcements have yet been made by Honmbale Films, it has still taken social media by storm. The creators wrote, "Dear Audience, You have always loved our cinema more than us," Taking to Twitter, "With our next "Indian Film" we come to continue to love and to be loved. Keep your heart open on 2 December at 2:09pm #HombaleFilms7 @vkiragandur @hombalefilms for our announcement."  Fans took to the comments section as soon as the announcement came up and shared how excited they were to hear the announcement.

Dear Audience, You always Loved our Cinema more than Us. To continue to Love and to be Loved we are coming with our next "Indian Film". Keep your Heart Open for our announcement on 2nd Dec at 2:09pm #[email protected] @hombalefilms pic.twitter.com/nAz8Lh3fIK— Hombale Films (@hombalefilms) November 30, 2020 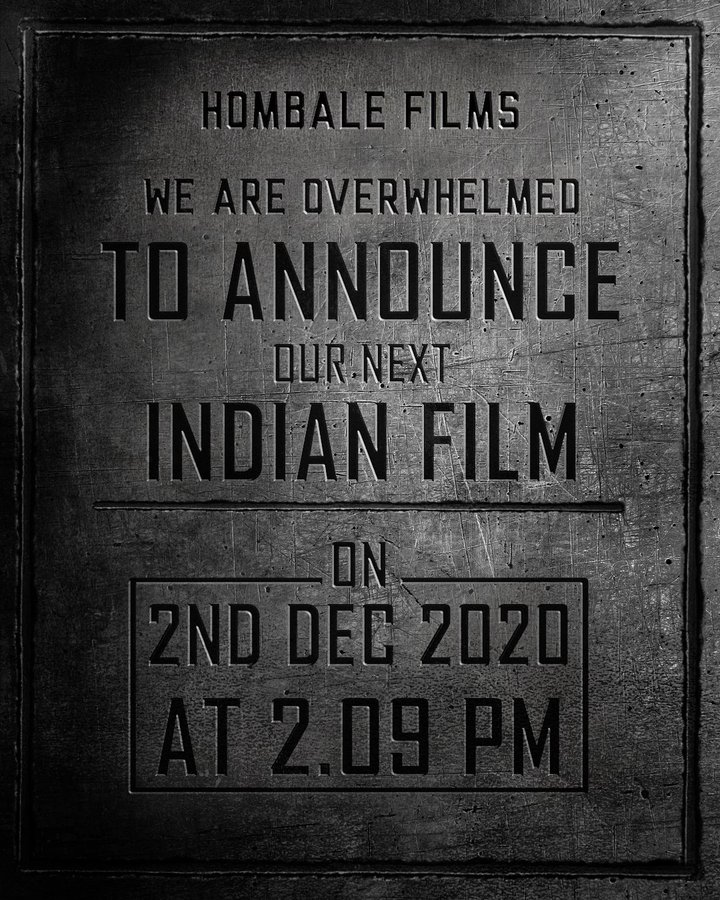 Currently, Prashanth Neel is busy with KGF shooting: Chapter 2. The final shooting schedule of the film takes place in Hyderabad at a brisk pace. KGF: As the leading lady, Chapter 2 has Srinidhi Shetty and also stars Sanjay Dutt and Raveena Tandon in important roles. Prakash Raj recently joined the team to shoot the film's final leg. Sanjay Dutt, the Bollywood actor, will be regarded as the main antagonist. In his kitty, Prabhas, on the other hand, has two biggies, including Radhe Shyam and Adipurush.