Ola Electric, the ride-hailing firm's electric vehicle arm, on Friday said that it sold e-scooters worth over Rs 1,100 crore in just two days, during its sale of Ola S1 and S1 Pro scooters. The SoftBank-backed company said this was unprecedented not just in the automotive industry, but also represented one of the highest sales in a day (by value) for a single product in Indian e-commerce history.

“Day 2 of the EV era was even better than Day 1. Crossed Rs 1,100 crore in sales in 2 days,” tweeted Bhavesh Aggarwal, co-chairman and group chief executive officer, Ola, on Friday.

Ola had announced in December 2020 that it would be investing Rs 2,400 crore for setting up phase 1 of the factory. The Ola Futurefactory is coming up on a 500-acre site in Tamil Nadu. At full capacity of 10 million vehicles annually, it would be the world’s largest two-wheeler factory and would handle 15 per cent of the world capacity.

In India, Ola is now in direct competition with electric two-wheeler makers, such as Ather Energy, Hero Electric, Bajaj and TVS Motor Company. The new developments at Ola Electric come at a time when electric vehicle (EV) adoption is getting traction in India with more vehicles sold in the first seven months than the whole of 2020.

EV makers sold 121,170 units across all categories between January and July against 119,647 EVs sold in the whole of last calendar year, according to the data from government’s Vahan platform.

The registered EV sales in July 2021 witnessed a month-over-month jump of 134.8 per cent, at 26,127 units, clocking the highest registrations in a month so far in 2021, according to JMK Research. This increase was driven by a jump in E2W (electric two-wheeler) registrations following the previous month’s FAME-II notification which increased the incentives on the EVs, further bringing down their prices.

Last month, Ola Electric took the wraps off its maiden e-scooter offerings - the S1 and S1 Pro - for a commercial launch with prices starting from Rs 99,999 (excluding state government incentives, registration fee, and insurance cost). Aggarwal had said the e-scooters were designed and engineered in India for the world and would deliver the best scooter experience to the consumer.

Among all the states and UTs, Uttar Pradesh continues to have maximum monthly registered EV sales with 17 per cent of overall sales in India in July 2021, according to JMK Research. Karnataka has the 2nd highest sales at 15 per cent share, followed by Tamil Nadu (12 per cent) and Maharashtra (10 per cent). 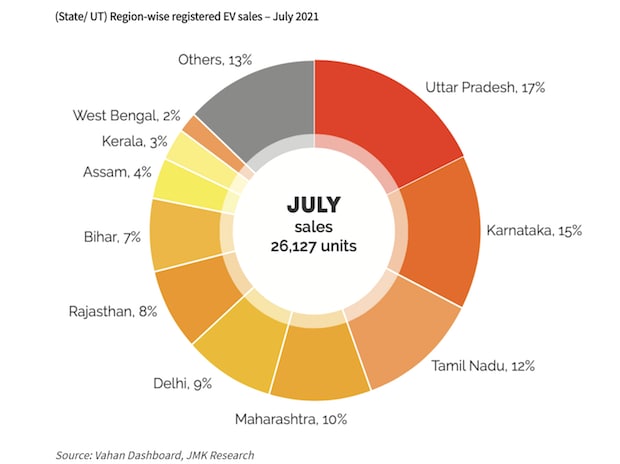 Thursday was the second and final day for the purchase of the Ola S1 and S1 Pro, the first in Ola's range of electric scooters. The company had sold scooters worth over Rs 600 crore in just 24 hours.

“While day 1 of purchase was quite unprecedented for us and the auto industry, day 2 simply continued from where day 1 left off,” said Aggarwal, in a blog post. “The excitement and enthusiasm customers showed for our products remained high throughout.”

While the purchase window is now closed, Ola’s reservations remain open on olaelectric.com.

“I want to let all of you know that we will be reopening the purchase window on November 1, 2021, just in time for Diwali,” said Aggarwal. “Those who have already reserved but did not purchase in the window that ended yesterday will also be able to purchase on November 1.”

Ola Electric, which had to defer e-scooter sales due to a website glitch last week, opened the sale of Ola S1 and S1 Pro on Wednesday. The vehicles are being sold exclusively on the Ola app and the process is completely digital.

The overall high-speed electric two-wheeler (HS-E2W) sales in the country in July 2021 stood at 13,345 units, witnessing a 229 per cent month-over-month jump over the previous month’s sales, and a year-over-year leap in registrations of 835.83 per cent, according to JMK Research. While established players (Hero Electric, Okinawa, Ampere, Ather) continue to dominate the HS market with a 69 per cent share in July-21 sales, other upcoming OEMs in this space such as PurEV (9.8 per cent), Bajaj (5.34 per cent), and TVS (4.8 per cent) too contributed a significant share this month.

India’s electric vehicle market could be worth nearly $206 billion in the coming decade if India were to achieve its 2030 EV ambitions, according to an independent study released by the CEEW Centre for Energy Finance (CEEW-CEF). The report also estimates a cumulative investment need of over $180 billion in vehicle production and charging infrastructure until 2030 to meet the country's EV ambition.