New Delhi: The strategically important, all-weather Atal Tunnel in Himachal Pradesh, linking Manali to the Lahaul-Spiti valley and that travel time by up to five hours to Leh (in the Union Territory of Ladakh), was inaugurated today by Prime Minister Narendra Modi. He was accompanied by Minister of Defence Rajnath Singh, General Bipin Rawat, Chief of Defence Staff (CDS), and General MM Naravane, Chief of the Army, as well as Jairam Thakur, Chief Minister of Himachal. PM Modi said the tunnel will improve India's border infrastructure, describing the moment as a "historic day" and one that heralded the realisation of the dream of former Prime Minister Atal Bihari Vajpayee-the tunnel being named after him.

"The Atal tunnel would give the border infrastructure of India new power. It is an example of world-class border connectivity. There have been demands to develop border infrastructure, but such projects have not been able to get out of the planning stage for a long time or have been stuck in the middle," the Prime Minister said in a speech at the inauguration. " Not only is this tunnel important to Himachal, but also because it enables a connect to Ladakh. People living in the mountains will know the importance of cutting travel time by four or five hours, added PM Modi.  He also used the opportunity to make some swipes at Congress (although without naming the opposition party), saying that his law had undermined the interests of security. 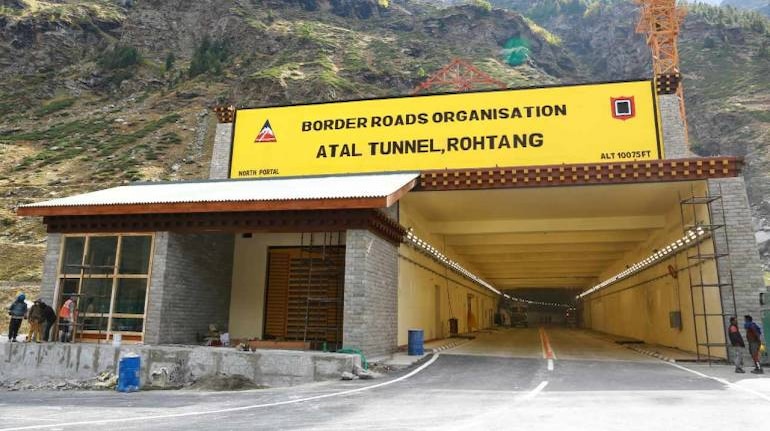 "There was no political will. From a strategic point of view, I can talk about hundreds of projects that are significant, but they have been ignored for years," he said, adding, "Nothing is more significant to us than defending the country. The nation has seen a period when the interests of defence were compromised." The 9.02 km Atal Tunnel, described as the world's longest highway building of its kind (above 10,000 feet), is designed to "ultra-modern standards" at an altitude of 3,000 metres (10,000 feet) in the Himalayan Pir Panjal range.

The Prime Minister's Office said in a statement that it is a horse-shoe-shaped, single-tube, double lane tunnel with an eight-metre roadway and an overhead clearance of 5,525 metres. It is extremely necessary to repair the logistical gap for our security forces in these times of heightened tension along the border with China, and the treacherous winter season is rapidly approaching, and the Atal Tunnel will do just that, and much more. Throughout the year, the 9.02 km long tunnel, the world's longest highway tunnel, links Manali and the Lahaul-Spiti valley, which was previously cut off for about six months per year due to heavy snowfall.

The tunnel is planned to have a traffic density of 3,000 vehicles and 1,500 trucks each day, each of which can travel at a speed of up to 80 km / h. The south portal (SP) of the tunnel is situated 25 km from Manali and 3,060 metres above sea level. At an altitude of 3,071 metres, the north portal (NP) is situated near the village of Teling in the Lahaul Valley. On June 3, 2000, when Atal Bihari Vajpayee was Prime Minister, the decision to build a strategic tunnel below the Rohtang Pass in Himachal was taken. The foundation stone for the South Portal access road was laid on May 26, 2002. In 2019, the Union Cabinet agreed to rename the Rohtang Tunnel as the Atal Tunnel to honour the former Prime Minister 's contribution.

The Border Roads Organisation (BRO) worked tirelessly to conquer the geological, landscape and weather difficulties of the 587-meter Seri Nalah Fault Zone, which included the most demanding stretch.